Solicitor at TV Edwards Solicitors & Advocates LLP
Image by Bill Sanderson via the Wellcome Collection, © Wellcome Trust Ltd 1990. Depicts Laocoön and his family (from Greek and Roman mythology) entwined in coils of DNA.

The number of female same sex couples undergoing fertility treatment has risen dramatically in recent decades, and the Women's Health Strategy suggests it is time we met the challenge...

Each NHS trust has their own fertility policy with criteria for access to NHS assessment or treatment. Progress Educational Trust, which publishes BioNews, is based in the London Borough of Camden which is within the North Central London Integrated Care Board ('NCL ICB'). NCL ICB has recently published its single policy which describes the circumstances where NCL ICB will routinely fund fertility treatments, such as IVF and intrauterine insemination (IUI). Up to six cycles of intrauterine insemination (IUI) are offered to eligible same sex couples, single people or other couples, under the conditions that the patient(s) have not conceived after six cycles of self-funded IUI (see BioNews 1152). This is similar for many residing elsewhere. These self-funded cycles cost on average between £700 to £1600 for each cycle. Donor sperm is an additional expense. These costs are prohibitive for many.

Which was why the first report for the launch of the Women's Health Strategy for England, published on 20 July 2022, was so exciting (see BioNews 1152). In the report plans are outlined to remove this financial burden for female same sex couples by making these six cycles of IUI available elsewhere in England. It is recommended in the report that: 'NHS treatment pathway for female same sex couples will start with six cycles of artificial insemination, prior to accessing IVF services if necessary.'

The new strategy is welcomed. However there remains the question whether each NHS trust will offer this treatment pathway, and if so, when? The report outlines that National Institute for Health and Care Excellence guidelines will be reviewed in 2024, but doesn't give any more information than this. There are currently significant variations in provision of NHS-funded fertility services, known colloquially as a 'postcode lottery', but the strategy only commits to greater transparency of provision rather than equality of provision. There is no commitment to provision of NHS-funded donor sperm either.

This strategy follows a number of significant changes over the last 20 years providing legal recognition of same sex families:

The Human Fertility and Embryology Authority (HFEA) publishes UK statistics for IVF and donor insemination treatment, storage, and donation. The most recent statistics were published in May 2021. The HFEA considers patients and treatment cycles by partner type, which includes surrogates and distinguishes between IVF cycles and donor insemination cycles. In 2000 no partner type was recorded for 3226 IVF patients, by 2007 just 79 did not have their partner type recorded, reducing to fewer than five in 2012.

To investigate how the patient demographic changed I looked at how many female patients had a female partner, I excluded the patients recording no partner type or surrogates and combined IVF and donor insemination patients. 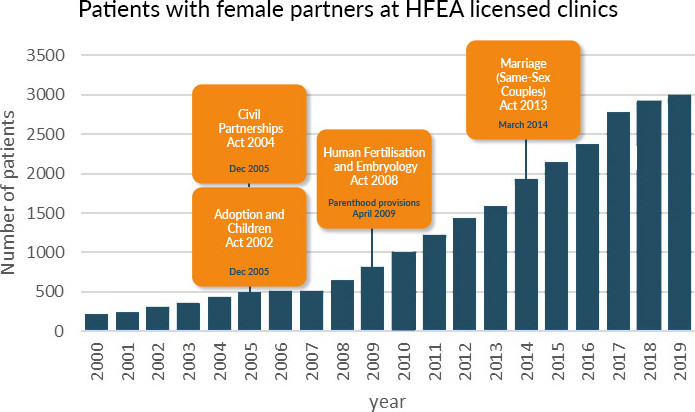 ONS statistics show in 2019 93.9 percent of women identified as heterosexual or straight, 1.1 percent of women identified as gay or lesbian and 1.6 percent as bisexual. Younger women are more likely to identify as being gay or lesbian, but the subsets of data do not easily correlate with the age of fertility patients. The HFEA statistics identify the gender of a woman's partner at the time of treatment, not their sexual orientation.

The Ministry of Justice publishes Family Court Statistics quarterly, giving National Statistics on activity in the family courts of England and Wales. These showed 191 adoption orders were granted to same-sex couples in 2011 rising to 663 in 2021. Excluding step-parent adoptions where the gender of the couple is unknown and where the adopter was other or not stated, same-sex couples accounted for 15.93 percent of adoptions in 2021, an increase from 4.67 percent in 2011.

There are clear trends showing a rise in same-sex couples seeking to expand their families. These correlate with legislative and societal changes and the positive benefits of campaigning are becoming increasing visible. It is hoped that implementation of the new Women's Health Strategy for England will help to remove some of the additional barriers faced by female same sex couples seeking to expand their families. However, it is important that the rest of society catches up with these changes.

The Red Book is the personal child health record given to all new parents. In August 2021 the BBC reported that two female parents of a child born in May 2021 received a red book with space for the names of mother and father. Disgracefully, this was over 11 years since the first children were born to two female parents following the implementation of the Human Fertilisation and Embryology Act 2008. In preparing this article I downloaded a copy of the Red Book and noted that the relevant page had been amended to read: 'Parent's/carer's name: (please state relationship to child).' There should be no excuse as to why any forms to be completed by parents should be using non-inclusive language.

The recent case of one half of a same-sex couple being inaccurately advised she had to adopt her own child reveled many of the heteronormative assumptions that underpin our understanding of family, argues Liam Davis.

Petra Nordqvist has two children with her partner, but learnt that only one was recognised as hers by Swedish authorities. This month, that changed...

The much anticipated and long overdue Women's Health Strategy for England was finally published by the UK government last week. Director at PET, Sarah Norcross, discusses the implications of the strategy for women accessing fertility treatment in England...

The Government has unveiled plans to allow female same-sex couples to access six rounds of insemination, ahead of IVF, on the NHS...

North Central London Integrated Care Board (NCL ICB) has introduced a new single fertility policy, commencing today, that enables those eligible, and under 40, to have three cycles of IVF and six embryos transferred under NHS funding...

Why fertility treatment must be in the Women's Health Strategy

The Progress Educational Trust draws the attention of the UK government to five areas of fertility treatment which have far-reaching consequences for the health of women...

« Was the Women's Health Strategy worth the wait?